As an Alzheimer’s Advocate, I’m always searching the news feeds for anything new in the Alzheimer’s world. Some of things I find are really interesting and what I believe to be helpful.

The latest being a new app called, Life in the Moment. “The full concept will launch in late spring. She hopes it will not only help families manage the disease but help monitor its progression. Life in the Moment will have “a variety of really practical daily life activity support tools, she said, “so that families just have one place to go.”
They even have the support of Glen Campbell’s family behind this app and will feature his song, “I’m Not Gonna Miss You.” It seems to be a very good piece of technology and will hopefully do what it says it will do. 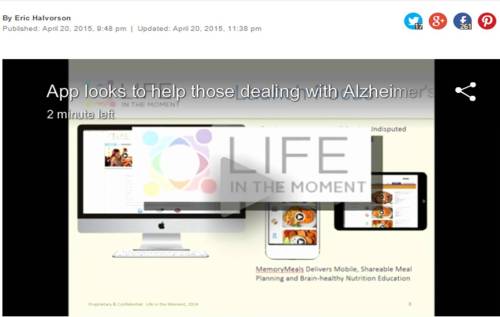 There is also an app that states:

This advertisement features an image of Gene Kelly from “Singing in the Rain” to help promote the app.

While I understand the idea behind this app, and it is “FREE” to download, instead of choosing the songs they have on their app, there are tons of places to download free songs on your phone or tablet that can be tailored to your loved one’s tastes.
One of my brothers made a CD for my Mother (who recently passed away on January 14, 2015 from Alzheimer’s)  and played it for her when he visited. My Mother loved music and had a beautiful singing voice. Our childhood was filled with music, especially the “Sound of Music” soundtrack, which my mother would sing along with Julie Andrews.
Anyway, she seemed to respond favorably to the music.
Since I have Early Onset Alzheimer’s, I also find listening to music extremely comforting, as well as emotional. To me, it is a healing tool.

But like I said, the app is free so, it may not be so bad.

So that’s 2 of the good things I have found on the Interweb. I’m sure there are more, but those were the most recent I came across so I used them as examples.
Now onto the other things.

As the caption on the picture says, “Can Coconut Oil Prevent Alzheimer’s?”
Well, let’s face it, if Coconut Oil could prevent Alzheimer’s, every Neurologist in the world would be prescribing it. Drug companies would be making their version of it and the future would be Alzheimer’s free.
Don’t get me wrong, Coconut Oil does have some great health benefits. My sister and brother-in-law take it religiously and it has helped them in a nutritional way, but, they don’t have Alzheimer’s. Coconut Oil has slightly improved brain function in people with Alzheimer’s, but only for a short period of time. I call it the band aid effect when it comes to Alzheimer’s.
I spoke with my Neurologist about Coconut Oil and he said the jury was still out and there was no concrete proof of its curability capability.

Then I came across this:

The first thing I read was, “A turmeric treatment on patients with Alzheimer’s disease symptoms has revealed “remarkable improvements. A recent study found three patients with Alzheimer’s disease (AD) saw reduced severe behavioral symptoms if they consumed less than a gram of turmeric each day, for three months.”
Read more at http://bit.ly/1IHZfAk

I’ve been taking Tumeric for more than a year. I haven’t seen any improvement. As a mater of fact, I have gone from Stage 3 to almost Stage 4. Maybe it works for people in earlier stages or maybe it is just me. I’m just saying what it has done for me,or better yet, what it HASN’T done for me.. Maybe it will work better for you.
Then there’s this . . .

Can What You Eat Help Prevent Alzheimer’s Disease?
http://on.wsj.com/1DAJzui

The MIND diet was developed by researchers at Chicago’s Rush University Medical Center, whose recent study found that certain foods could help prevent the onset of Alzheimer’s disease.

Although I grew up in New Orleans (the worst place to live if you want to eat healthy but some of the most delicious food you have ever eaten. OMG how I miss that food!) my mother always served us balanced meals. We always had a salad, a vegetable, a protein and a starch. Sure, back in the 50’s, 60’s and 70’s, there was a lot of grease or other fats mixed into the food to make them taste absolutely wonderful. However, my Mother was the poster child for eating low cholesterol, low carb, low fat and high protein. She would even weigh the meat to make sure her and my dad only ate 4oz’s per serving, yet, she developed Alzheimer’s and my Dad developed Dementia.

I’m now on Aricpet and will soon be on Namenda. These drugs are to help slow the progression of Alzheimer’s, giving those that have it a little more time time to enjoy the good parts of their lives. But, after a while, it no longer stops the progression and, well, you know what happens after that.

So, I am in no way trying to say that it’s a waste of time for people and companies trying to come up with ways to prevent this disease or cure those of us that have it. There have been some breakthroughs but still there is no sure fire way of preventing or curing this disease.

More funding is needed to come up with a sure fire prevention and cure. Without that, everything else is just fluff, or as I previously called it, a band-aid.

You and I both know that after while, band-aids come off and something else then has to be applied.

This blog is a compilation of stories and experiences as I travel along my journey with Alzheimer' Disease, Vascular Dementia, Type 2 Diabetes and probably some other things I don’t yet know about. Each day, I LIVE as well as I can by Advocating, listening to music, laughing, talking with friends and whatever I feel like doing in the moment. “I have Alzheimer’s Disease BUT, I don’t allow it to define who I am!” View all posts by A Bit of Brian's Brilliance