“Here we come, walkin’ down the street,
We get the funniest looks from, ev’ry one we meet.
Hey, Hey we’re The Monkees . . .

Yes, I’m talking about “The Monkees.” The same “Monkees” who appeared on your TV’s on Saturday mornings in the 60’s. They are still performing today, well, 2 out of the 4 Monkees are. As you may know, or haven’t heard, Davy Jones passed away in February 2012 and Mike Nesmith no longer tours with Micky and Peter. 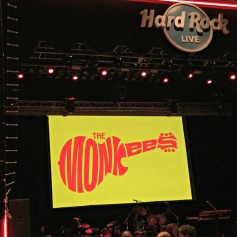 iting this blog post about “The Monkees?” ? Well, thanks for asking.
Shannon (my wife) and I went to Biloxi, MS last weekend (10/1) and saw them at the Hard Rock Live. They put on a great show, singing their songs, playing their instruments as if they were still in their 20’s. At 71 (Micky) and 74 (Peter) they can still rock it!

It was not so much the actual performers we went to see (well, Shannon did have a bit of a crush on Micky when she was younger) but it was the music they perform.
Sitting in that audience Saturday night, listening to them play all of their hits (and there were many) it just made me smile and forget about my Alzheimer’s for a bit. I was that little kid again, sitting on the floor watching TV, singing along to “Take the Last Train to Clarksville”, “I’m a Believer”, “Pleasant Valley Sunday”, just to name a few. And no, it wasn’t just me. The entire audience was singing along.

It’s a proven fact that while music can soothe and relax most people, it has a profound effect on individuals living with Alzheimer’s.
According to the Alzheimer’s Association “Music can be powerful. Studies have shown music may reduce agitation and improve behavioral issues that are common in the middle-stages of the disease. Even in the late-stages of Alzheimer’s, a person may be able to tap a beat or sing lyrics to a song from childhood. Music provides a way to connect, even after verbal communication has become difficult.”
Read more: http://www.alz.org/care/alzheimers-dementia-music-art-therapy.asp#ixzz4MVXGu4Zr

Being I’m in the middle stages of Alzheimer’s, I utilize music to kee me calm and relaxed. It takes the edge off and keeps me from being anxious. When I hear one of my favorite songs, it sort of transports me back to a place where I was clear-minded, relaxed and happy. I can only hope when I get into my later stages, music will bring me comfort.

It’s just age. It happens to all of us, but like their song says, “That Was Then, This Is Now.”

They are still funny (especially Peter), bantering back and forth. There was a huge screen behind them  playing videos and showing photos from their TV show and performances. They even had Davy Jones singing his vocals on “Daydream Believer”. It was a bittersweet moment for the audience as well as for his 2 friends on stage.

I walked away from that concert feeling refreshed, clear-minded, wishing it would it would last . . . and it did, at least for a little while.

Thank You Micky Dolenz and Peter Tork for continuing to do what you do.
Thanks also to Mike Nesmith and the late Davy Jones for doing what you did.